We are excited to announce that 2 of our NIAGARA FC OPDL Players who attended the Ontario Soccer Provincial Xcel Program Trials last month were chosen for the 2022 Provincial Teams!

Ava DeChellis who formerly hails from Welland Soccer Club is an amazing athlete and Midfielder! She joined NIAGARA FC OPDL in its inaugural year (2021) here in Niagara with Coach Joseph Lamberti and the U13 Girls team.  Ava will be playing on the Ontario Soccer Provincial U14 Girls team who will be competing in the Provincial Xcel All-Star Competition weekend at the end of April.  Ava will continue to play with her NIAGARA FC OPDL U14 team throughout the 2022 season and we can't wait to watch her continue to grow and develop this season!

Matthew Bogusat who previously played with St. Catharines Club Roma Wolves NRSP team also joined NIAGARA FC OPDL in its first year of 2021 with the U15 Boys team with Coach Carlos Rivas.  He is a strong Left Back who makes an impact when he is on the field.  He will be part of the U16 Boys Provincial team which will attend the Preparatory weekend after Easter and then go on to the 2022 Inter-Provincial Competition being held in Quebec at the end of April.

Overall, after the first year within the Ontario Player Development League (OPDL) 11 NIAGARA FC players were selected to attend the Ontario Soccer Provincial Xcel Trials.  This is quite an achievement and it is through a collaborative process that these players are selected.  All players from NIAGARA FC who participated in the Ontario Provincial Screening Competition process are thanked for their efforts and congratulated for representing the Niagara Region so well!  These players will continue on with their NIAGARA FC OPDL teams in the 2022 season and will hopefully be selected to attend trials once again next year! 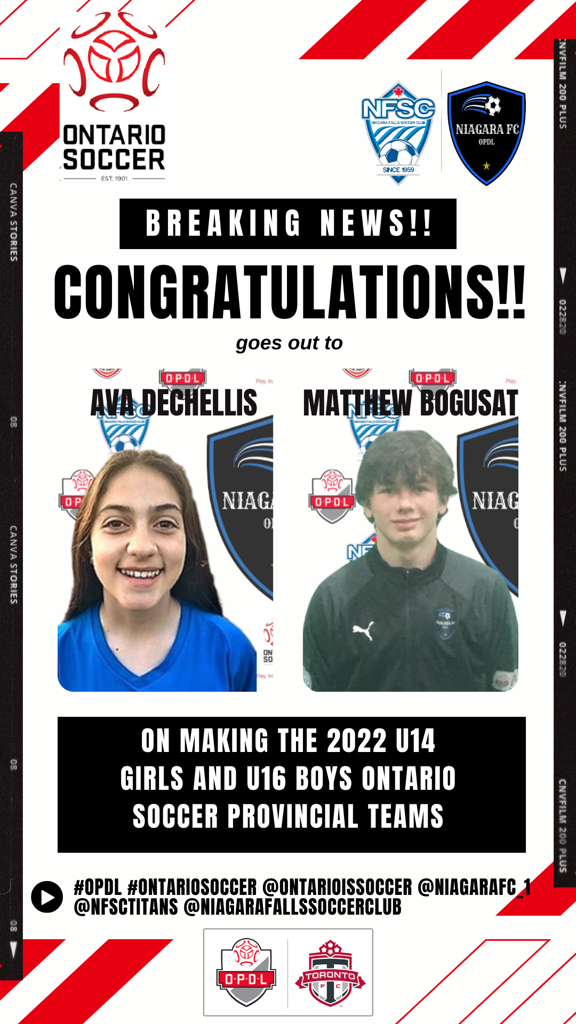